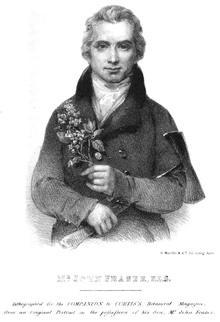 The Fraser fir was named for John Fraser, a Scottish botanist who explored the southern Appalachian Mountains of North Carolina in the late 1700s. It is a pyramid-shaped tree that reaches a maximum height of 80 feet and a trunk diameter of 1-1/2 feet.

The Fraser fir grows naturally only in the southern Appalachians, above 3,000 feet. The cool temperatures and lots of rainfall of the North Carolina High Country are what causes the Fraser fir to keep its needles throughout the Christmas season.

It is generally agreed that the first use of a tree as part of the Christian Christmas celebration was started over 400 years ago by the Germans. The Christmas tree was brought to America by the Hessian mercenaries that were paid to fight for the British during the Revolutionary War. In 1804, soldiers stationed at a fort near Chicago hauled trees to their barracks during Christmas.

In 1842, a German named Charles Minnegerode introduced the custom of decorated Christmas trees in Williamsburg, Virginia homes. His tree was described as being "splendidly decorated" with strings of popcorn, nuts, and lighted candles.

By 1900, one in five American families decorated trees during Christmas and by 1930, the tree had become a nearly universal part of the American Christmas.

Choose N Cut at the farm is officially closed!