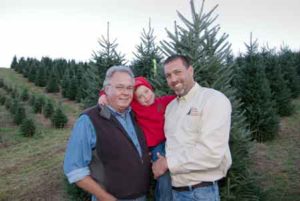 The Boyd Farm has been continuously in the Boyd family for over 100 years, and continues to be a working farm. David J. Boyd and his wife Kate Moody Boyd were large landowners and a prosperous farming family. They had many hundreds of acres of land from the present location to further up Hemphil Road. The white house on the knoll as you come in to the property on Boyd Farm rd. is the Boyd Homestead, built in the early 1900's, where nine children were raised. The Boyd family raised cattle, and had crops of tobacco, corn, and potatoes --- David Boyd was known fondly as "Tater Dave" --- he lived to be 100 and died in 1970. The eldest son, Dock Boyd now deceased was father of Dan Boyd who is presently the owner of 130 acres of the family land which includes Christmas Tree farm and the cabin rentals and the log home he shares with his wife Betsy. Dan always had fond memories of his grandparents farm and reunions held by the pond every summer, and purchased this land in 1972 from two of his uncles and his father who had inherited this part of the farm allowing them to continue the cattle farming on the property if they would permit Dan and Betsy to build a log cabin on the property. Dan and Betsy built their home in 1974, and also a log outbuilding adjacent to their house, used for storage. They found the hand hewn cabins for their home in Spring Creek, Madison County, NC, Dandridge, TN near Lake Douglas, Hurricane section of "Twelve Mile Strip" and the Hemphill Community of Haywood County, NC.

When Uncle David, and Uncle Bob and his father gave up farming, Dan had a vision for his retirement from dentistry. He would grow Christmas Trees and restore antique log cabins on the property. In 1984 the first Fraser Fir Christmas Tree was planted and other seedlings were planted each year afterwards... and seven years later that first crop was harvested. Our Choose N Cut began in 1999. Some of the trees are now 25 years old.

In 1994, Dan retired from his dental practice in Waynesville and devoted his time to growing trees, cabin rentals and restoration and operation of two car washes in Waynesville.

Choose N Cut at the farm is officially closed!